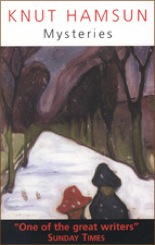 I pulled this from a bookshelf in a house where I was staying in Ireland. It's not a novel I would ordinarily have been drawn to but I'd read all the books I'd brought with me.
Johan Nagel arrives in a small coastal town in a yellow suit and sets up in the town’s hotel. He befriends a number of townspeople and offers money to the more disadvantaged citizens.He takes a character named "The Midget" under his wing. But why does he do this? And Nagel exhibits strange and emotional behaviours towards Dagny Kielland to whom he is apparently attracted. He confesses that he has been less than honest in his presentation of himself. Dagny is confused about what is truth and what is made up.
The book is very modern considering its publication date of 1892. Is Nagel bipolar? Nagel’s behaviour becomes increasingly eccentric.
Who is Nagel? Who is the veiled woman? There is much revealed but much left unanswered.
Posted by The Nag at 7:10 PM