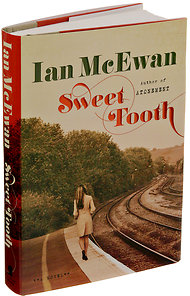 A new novel by Ian McEwan is like a sweet treat, eagerly anticipated and gobbled up in one sitting. Don't expect me to be impartial I love Ian McEwan's intelligence and his masterful skill with language. This one takes place in cold war era London. Math graduate Serena Frome is recruited via an older married lover as an unlikely spy by the British security agency. Her unlikely mission is to covertly foster the literary career of a young writer, Tom Haley, who will likely promote an anti-leftist point of view. This seems an inefficient method of disseminating pro-British propaganda and Serena seems an odd choice as a literary mentor as her own taste in literature is unsophisticated. She has had a couple of affairs in a very short time and predictably she messes up MI5's plan by falling into bed with Haley as soon as they meet. A relationship based on lies ensues.
This is not John Lecarre spy fiction. It is about a promiscuous young girl of average intelligence who becomes involved in a half assed plot to influence public perception through state financed publication of right-leaning fiction. In the end she gets sacked and ruins Haley's career prospects. I sense this is the way things work in the real world. And, as I expected I loved it.
Posted by The Nag at 5:36 PM