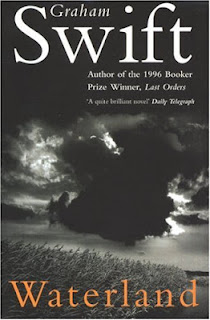 I hit paydirt again while surfing the bookshelf of my Irish hosts - a novel by Graham Swift that I'd not yet read! Waterland, written in 1983, is set in East Anglia. It spans several centuries in the waterlogged fen and covers eels, ale, incest and family secrets. In typical Swift style the story is laid out at the start in a such a way that the reader has a lot of questions. We know that the narrator's wife has been involved in the kidnapping of a child but not how or why. Swift then doles out bits of information bit by bit until it all makes sense. We learn that in East Anglia, as in other locales, history has a tendency to repeat itself.
The narrator, history teacher and son of a lock-keeper Tom Crick, tells us a story not only imbued with water but superstition, sexuality, abortion, murder and madness as well. Oh, and beer. And they are all intertwined.
Tom has been teaching at a school in Greenwich for more than three decades. The headmaster has been itching to get rid of the history department and when Tom's wife kidnaps a baby and a scandal ensues Tom is forced into taking retirement. Knowing the writing is on the wall Tom shares his family history with his students and with us. The students submit and we do too. I could do without some of the dry discourse on land reclamation and eels but the story is a wonderful one and made Swift's reputation.
Posted by The Nag at 6:23 PM