Redhead By The Side Of The Road 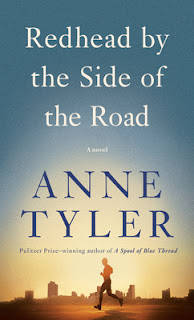 This is Anne Tyler's twenty-third novel. Fortysomething Micah Mortimer (aka the Tech Hermit) lives alone and is a creature of habit. He fixes computers for the technology-naive and is the custodian of a small apartment building in Baltimore (where most of Tyler's novels are set). His routine is simple and unwavering. He goes for a run, showers, has breakfast, tidies his spartan apartment, takes care of chores around the building and responds to calls from computer clients. Some evenings he has dinner with Cass, a "ladyfriend" of the last several years, and they watch tv. He's so predictable that his rowdy family teases him about it. A dinner he has with his four sisters and their families is a highlight of the book. They are his polar opposite, rollicking, quirky and disorganized. It's hard to believe that they are his kin. Is his micromanaged life his response to a chaotic early family life "in a household where the cat slept in the roasting pan"?
One day a young college student named Brink shows up at his door claiming to be his son. Micah's first girlfriend, Lorna, is Brink's mother. Then Cass is offended by Micah's insensitivity and declares that their relationship is over. These events force Micah to reevaluate his rigid rules for living. It's a really slim book but, in typical Tyler style, perfectly crafted and infused with empathy.
Posted by The Nag at 5:20 PM