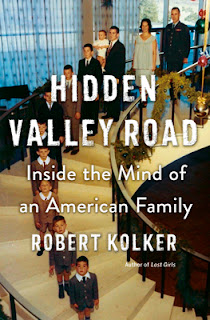 Robert Kolker's Hidden Valley Road is a fascinating and heart wrenching book. Don and Mimi Galvin were an upwardly mobile family in the post WW2 years. Don had a fulfilling career in Colorado and Mimi was a capable mother of twelve remarkably accomplished children raised in an atmosphere of seeming domestic harmony. Others envied them but behind the scenes life in the Galvin household was not as idyllic as it appeared from the outside. Six of the children developed schizophrenia as young men and normal life on Hidden Valley Road became an impossibility. Side by side with the progress of the family's disintegration is a parallel story of developing research into schizophrenia. When I was completing a psychology degree in the  1970s I worked on adolescent units in several psychiatric hospitals where the "schizophrenogenic mother" model was still accepted. This book explores the evolution of schizophrenia research into the area of genetics and the role the Galvin family played. It's a harrowing story about the impact of mental illness on families but Kolker makes it readable. I have been dawdling my way through books these days but tore through this one.