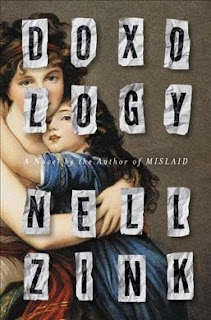 Doxology by offbeat author Nell Zink begins with the friendship of three aspiring musicians who form a punk band in the late 1980s in New York City. Pam has left her abusive family behind and works as a coder, Daniel works as a temp and Joe is a naive, super cheerful and weird soul who suffers from a mild case of Williams Syndrome, a genetic abnormality. They play together for awhile until Pam and Daniel unintentionally have a daughter, get married and become busy with their jobs. Joe is their babysitter and (surprisingly) he also gains fame and fortune as a rockstar. Pam, at Daniel's urging, reconnects with her upper-middle class parents in Washington, DC and they are delighted to meet their granddaughter, Flora, and step up to help with her care as Joe's career takes off and he's touring more. Then 9/11 happens and everything changes.
The second half of the book focuses on Flora. She's an easygoing child who shows none of the rebelliousness her mother displayed as a young girl and flourishes under the shared parenting system. She is idealistic, studies soil erosion in Ethiopia, becomes involved in the eco-movement and, because it is offered, takes a low-paying job with the Green Party campaign prior to the 2016 election. Through that work she becomes involved with two very different men who will have a great influence on her life.
The first half of the book focuses on the NY music and exploding tech startup scenes and the cynicism of the record industry. The second half takes a hard look at environmentalism and politics, including the rise of Trump and Pizzagate. What the two halves of the book have in common are unplanned pregnancies.
I worked in politics for decades and I thought the political focus in the second half was a little overdone. Zink's satirical edge adds interest, the characters are quirky but likeable. It probably won't appeal to those who prefer plot driven novels but it's a family saga for our times.

Previously: Wallcreeper
Posted by The Nag at 10:46 AM